It’s been pretty quiet on the birding front but I decided to go on the Nanaimo/Parksville Sunday bird walk to Bowen Park. In the heart of Nanaimo, this park is a jewel with most of its 36 hectares undeveloped.

The walk starts in the parking lot, near the first hole of Nanaimo’s Disk Golf course where we quickly spotted a Brown Creeper while waiting for the group to assemble.  This one was quite vocal (for a Creeper) emitting a double note call at fairly regular intervals making us wonder if it was a young bird.

It was pretty quiet today.  There were no Starlings or House Sparrows which helped keep the BQI (Bird Quality Index) high.

Shortly after we started down the birding trail we discovered a fairly large paper wasp nest. What I liked was the colour and pattern — different from the grey nests I am used to. Perhaps mocha is this year’s colour in paper-wasp real-estate.

A bit further, someone noticed an interesting spider web hanging between trees. With a bit of light that made it through the thick forest canopy it looked a bit like a suspended compact disk.

Next along the way was a Pacific-slope Flycatcher, making short foraging flights, returning to the same perch. He was quite cooperative, hanging out a few meters from the path so that everyone could get a good look or take a few pictures.

Pileated Woodpeckers frequently are oblivious to us birder-humans as we take shot after shot while they peck away at the trees.  This female was pecking at various trees, occasionally do light renovations to existing holes. With the dark under-canopy, the camera shutter speed was in the 1/100 to 1/200 range so you had to snap your shot during the bird’s brief bouts of pounding or the image would be heavily blurred.

We saw a Barred Owl along the way but getting a good image would have been a challenge so I didn’t even try. The following two owls, however, cooperated with my picture taking:

Almost at the end of our outing, we found our ‘Bird of the Day’ — an American Dipper. It was hanging out in a shaded spot at the edge of the Millstone River. The BQI definitely jumped when we found this bird.

That was it. About three hours at Bowen Park. Total species count: 25.

This walk was organized by the Nanaimo Backyard Wildbird and Nature Store. They can be contacted for more information on future Sunday or Tuesday outings. 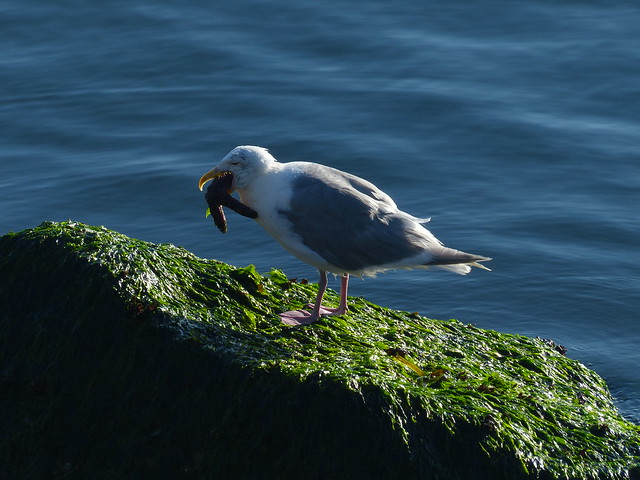 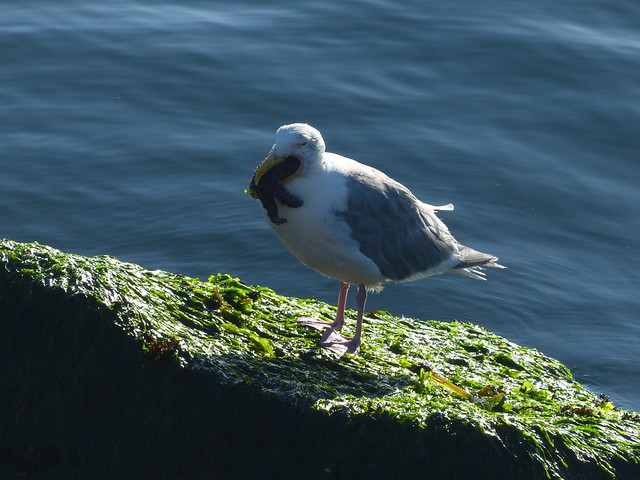 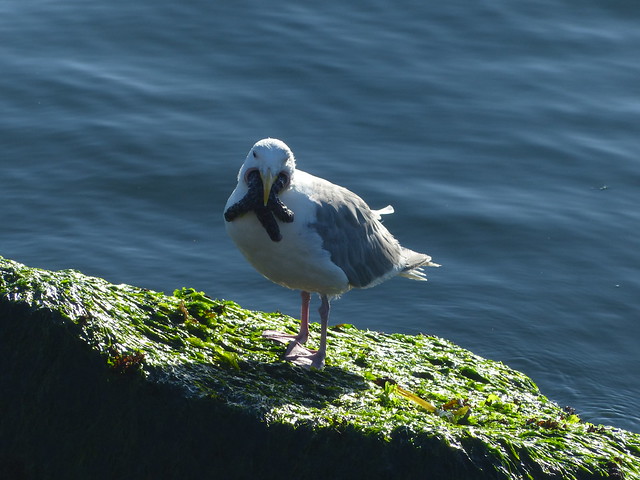 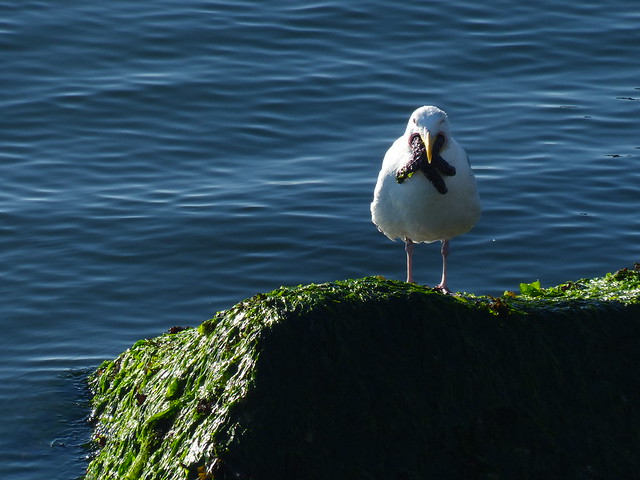 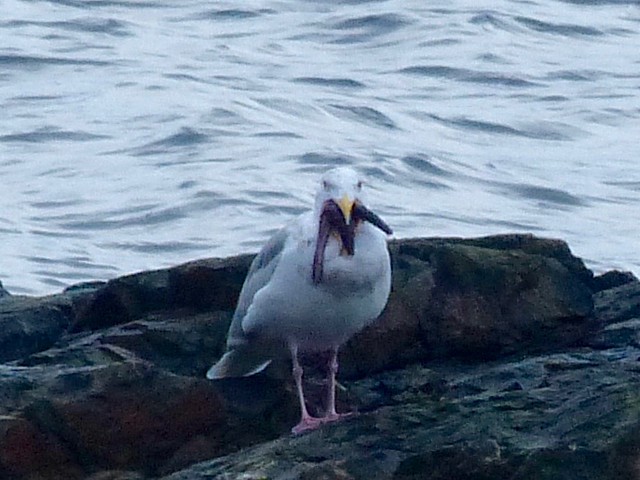 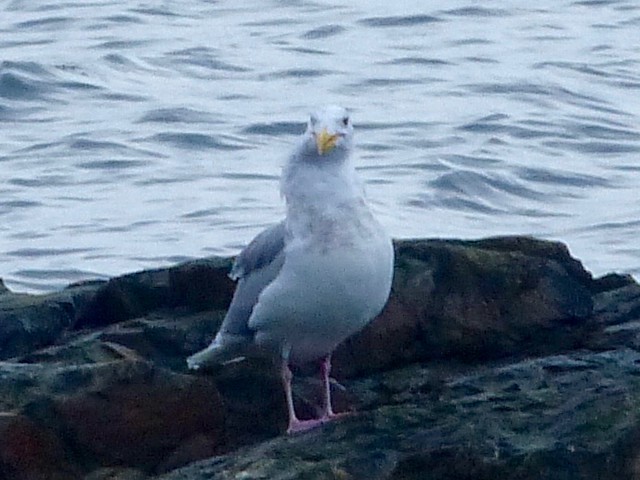 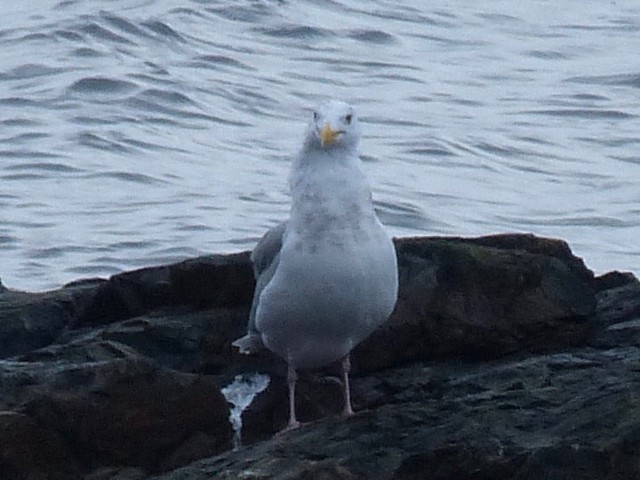 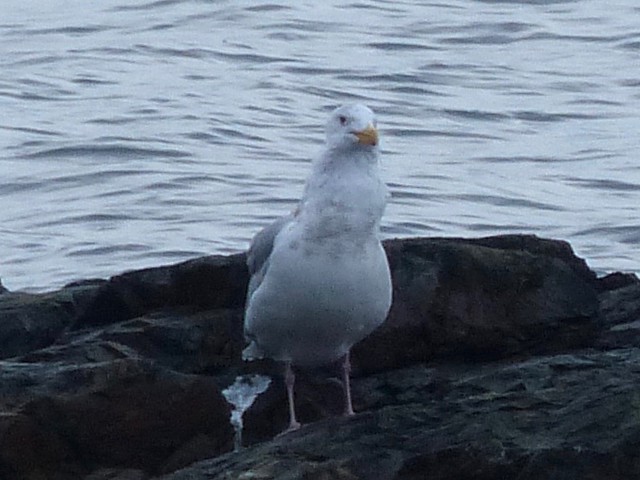 I sometimes wonder why I don’t get bored going to the same birding locations month after month, year after year.  A big part of it is that, on any given day, there is a chance that they will see something different or rare or perhaps even totally new.

This past Sunday, while on an organized outing with a bunch of local birders to Buttertubs Marsh Bird Sanctuary in Nanaimo, I got my “something-new” fix.  In this case is wasn’t a new species of bird — instead it was an inter-species interaction that I had never noticed before – that of an American Wigeon stealing food from an American Coot.

The first of the two species, the American Wigeon (Anas americana), is a duck that is part of the genus Anas sometimes referred to as dabbling ducks.  These duck may feed on land or on the water where they can tip themselves upside down and gather underwater plants up to several inches below the surface.

The second of the two species, the American Coot (Fulica americana), is in the family Rallidae of rails and looks a little like a small black chicken.  These birds may feed on land, by dabbling in shallow water or by diving for plants.

I captured a short video of the food stealing behaviour (kleptoparasitism) with my Panasonic DMC FZ-200 camera.  I may have had too much fun and gotten a little carried away with the presentation.  You be the judge:

At one point there were at least 3 or 4 Wigeon-Coot pairs doing similar food-stealing dances.

On another occasion I watched as a Wigeon tried to manage two Coots at the same time and seemed to spend a lot of time in the middle trying to decide which way to go.  Not a good strategy for a low-intelligence bird it would seem.

Some further comments and other notes resulting from forays into online ‘research’:

A good source of information that I like to use is the Birds of North America online service from the Cornell Lab of Ornithology.  The service is not free but for anyone curious about bird behaviour it’s worth the price in my opinion.  They have a one month subscription that costs $5 if you want to give it a try.

I made my first post-election birding trip yesterday.  A friend, who I’ll refer to by his initials LR, and I set our Nanaimo itinerary to take us on a loop including Neck Point, Pipers Lagoon, the Nanaimo River Estuary and Buttertub Marsh.

We should have known better as we only made it to Neck Point and Pipers Lagoon spending more than two hours at those two sites.  We did add the Linley Valley Drive Wetlands which is walking distance from our house.

As usual, I had both camera and binoculars at hand.  Birding was enjoyable and I did get a couple of nice pictures that I’ll share.

We arrived at Neck Point and had barely got out of the car when the buzzing (for an example play this recording of a Bewick’s Wren on Xeno-Canto) of a Bewick’s Wren was heard.  There was actually a pair flitting around near the parking lot and they were surprisingly unafraid bopping around in plain site.  Here is one checking me out:

Note that I rely heavily on the auto-focus feature of my camera (Panasonic FZ-200).  When taking of pictures of fast moving birds, especially when they are in bushes the auto-focus does not always behave.  Here is an example:

Pipers lagoon was more productive producing a total of 23 species (eBird checklist).  The picture bird, a male Hairy Woodpecker,  was again located first by sound (here’s a recording of a Hairy Woodpecker on Xeno-Canto).  Here’s a picture that shows the long bill (compare with the shorter bill of its smaller look-alike cousin the Downy Woodpecker):

The final picture, while not of the highest quality because it was taken at full zoom, proved to be useful for the identification of a pair of gulls sitting on a small rock offshore.  The yellowish legs and plumage suggested a California or a Mew gull.  Studying the picture later suggested that it was a Mew Gull.  Check it out for yourself:

A two minute walk from my house is a small wetlands  surrounded by housing developments in various stages of completion.  We spent about a half hour walking the path that runs along one side of the pond and saw some interesting birds (5 new species for the day) including a Hooded Merganser pair, Ring-necked Ducks, a Fox Sparrow, Chestnut-sided Chickadees (surprisingly not seen at the other two locations) and a Pied-billed Grebe.  The site total was 12 species (eBird checklist)