I made my first post-election birding trip yesterday.  A friend, who I’ll refer to by his initials LR, and I set our Nanaimo itinerary to take us on a loop including Neck Point, Pipers Lagoon, the Nanaimo River Estuary and Buttertub Marsh.

We should have known better as we only made it to Neck Point and Pipers Lagoon spending more than two hours at those two sites.  We did add the Linley Valley Drive Wetlands which is walking distance from our house.

As usual, I had both camera and binoculars at hand.  Birding was enjoyable and I did get a couple of nice pictures that I’ll share.

We arrived at Neck Point and had barely got out of the car when the buzzing (for an example play this recording of a Bewick’s Wren on Xeno-Canto) of a Bewick’s Wren was heard.  There was actually a pair flitting around near the parking lot and they were surprisingly unafraid bopping around in plain site.  Here is one checking me out: 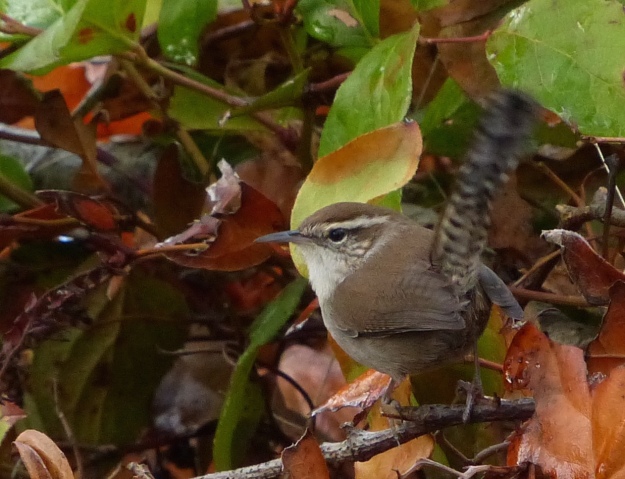 Note that I rely heavily on the auto-focus feature of my camera (Panasonic FZ-200).  When taking of pictures of fast moving birds, especially when they are in bushes the auto-focus does not always behave.  Here is an example: 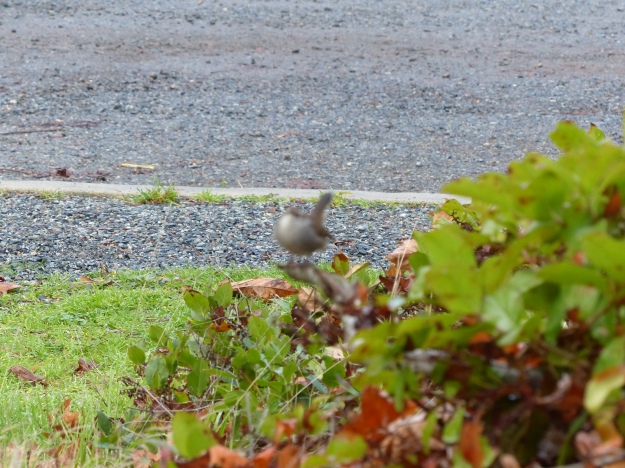 Pipers lagoon was more productive producing a total of 23 species (eBird checklist).  The picture bird, a male Hairy Woodpecker,  was again located first by sound (here’s a recording of a Hairy Woodpecker on Xeno-Canto).  Here’s a picture that shows the long bill (compare with the shorter bill of its smaller look-alike cousin the Downy Woodpecker): 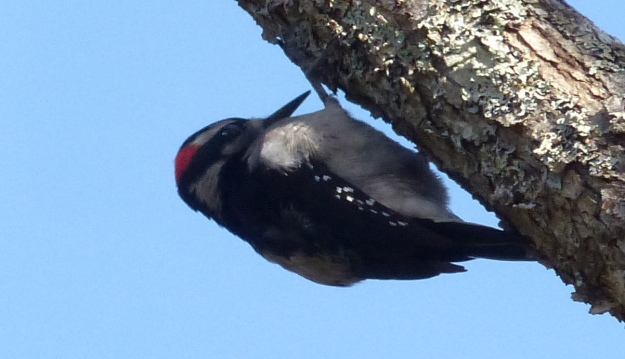 The final picture, while not of the highest quality because it was taken at full zoom, proved to be useful for the identification of a pair of gulls sitting on a small rock offshore.  The yellowish legs and plumage suggested a California or a Mew gull.  Studying the picture later suggested that it was a Mew Gull.  Check it out for yourself:

A two minute walk from my house is a small wetlands  surrounded by housing developments in various stages of completion.  We spent about a half hour walking the path that runs along one side of the pond and saw some interesting birds (5 new species for the day) including a Hooded Merganser pair, Ring-necked Ducks, a Fox Sparrow, Chestnut-sided Chickadees (surprisingly not seen at the other two locations) and a Pied-billed Grebe.  The site total was 12 species (eBird checklist)