Our back deck overlooks one end of a wetlands that eBird identifies by the hotspot Oliver Woods Community Centre Pond. This location, which has only been identified as a hotspot since February 2019, has more than 50 species associated with it.  I have seen most of these from the comfort of our back deck.

In the last few days Cedar Waxwings have caught my attention. There appears to be a resident population of ten or twenty Waxwings that hand out around our end of the pond.  I usually think of this bird as hanging around in flocks looking for berries to gorge themselves on, particularly in the winter months.   I would normally expect them to be somewhere else right now.  According to the All About Birds information for the Cedar Waxwing, however, this region has year-round populations. of Cedar Waxwings.

First, a number of the birds regularly spend time on top of the large lily pads that cover much of the pond. They appear to be foraging for insects.  The following picture shows an example: 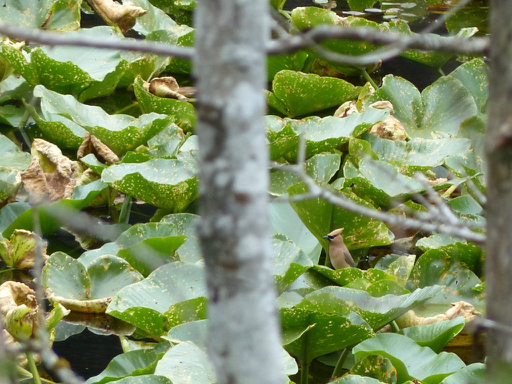 I noticed the second interesting behaviour at dusk.  Here is a picture of the pond just before sunset.

The glowing areas are some bushes catching the last daylight.  The glow is also attracting lots of flying insects.  The Cedar Waxwings were attracted to these insects and were making short excursions from nearby perches to fly-catch.

Here are a some images of perched Waxwings between foraging flights: 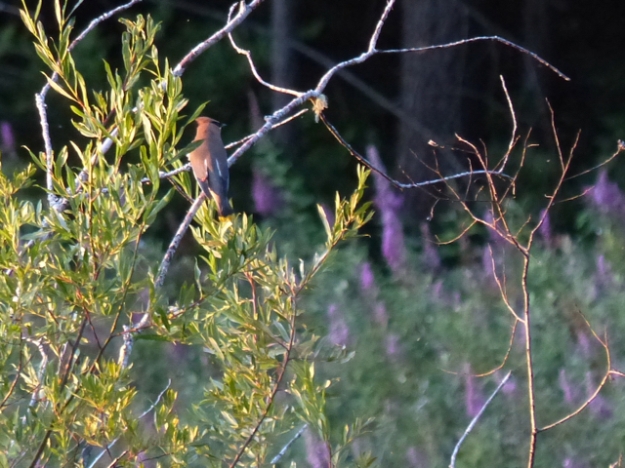 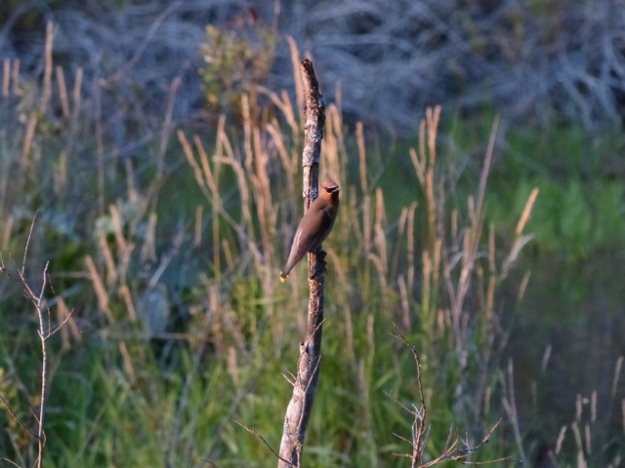 I will have to try making short videos of the fly-catching flights.

I did a little more research into Cedar Waxwing behaviour.  From the Food section of the All About Birds website Life History for the Cedar Waxwing I found the following:

Cedar Waxwings feed mainly on fruits year-round. In summer, they feed on fruits such as serviceberry, strawberry, mulberry, dogwood, and raspberries. The birds’ name derives from their appetite for cedar berries in winter; they also eat mistletoe, madrone, juniper, mountain ash, honeysuckle, crabapple, hawthorn, and Russian olive fruits. In summer Cedar Waxwings supplement their fruit diet with protein-rich insects including mayflies, dragonflies, and stoneflies, often caught on the wing. They also pick items such as scale insects, spruce budworm, and leaf beetles directly from vegetation.

I also checked Birds of North America Online (requires a subscription) and found the following text:

One of only three species worldwide in the family Bombycillidae, the Cedar Waxwing is named for the red, waxlike tips on the secondary flight-feathers of adult birds. Sugary fruits dominate the diet of this bird, especially in winter. During warmer months, Cedar Waxwings glean insects from vegetation or snatch them from the air in sallies from exposed perches, often near streams or ponds. This is a true frugivore, assimilating nutrients from fruit pulp and passing seeds intact back to the environment.

Apparently this is all normal behaviour.  Huh!

All About Birds Cedar Waxwing Gallery