Empidonax: from the Ancient Greek empis for “gnat“, and anax for “master”.

Anyone who regularly watches birds in North America will, at some point, come across  a small flycatcher from the genus Empidonax for which species identification may have proven to be difficult or impossible.  In many cases the only reliable identification requires hearing the bird’s song which is only sung by the adult male and usually only during breeding season.

There is a second genus of flycatcher, Contopus, (pewees and wood-pewees) that should be considered as some of its species can resemble those of Empidonax. On Vancouver Island the relevant Contopus species are the Olive-sided Flycatcher and the Western Wood-Pewee.

Our house backs onto a small pond and wetland decorated with fairly heavy brush that provides good cover for birds and other critters.  The brushy area behind our yard is where I recently encountered the flycatcher shown in the following pictures: 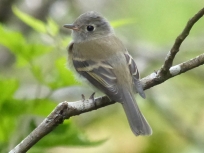 These images were all taken with my Panasonic FZ-200 camera and have not been edited other than to crop the images. No song or call was heard from the flycatcher.

None of the Contopus flycatchers appear to be a match leaving us with Empidonax.  Based on the Sibley Guide to Birds (2000 edition) the only Empidonax species that we should see in the Nanaimo area are Pacific-slope, Willow and Hammond’s. The Least, Dusky and Gray Flycatchers have normal habitats that come close to Vancouver Island and should not immediately be discounted when comparing species based on appearance.

I am not comfortable assigning my flycatcher pictures to any of the above mentioned Empidonax species to I will solicit birders out there to propose a species type for the above images hopefully with an explanation for their identification.

Here are some resources for flycatcher identification.  I will update this post if I find additional interesting links.

Identifying Flycatchers on their Wintering Grounds

If you think that identifying the Empidonax and Contopus flycatchers is difficult up here in Canada and the US during breading season, consider what it must be like in April and May in South America where migratory species from the East and West coasts of North America are intermixed with non-migratory resident species.  To make matters worse they various species may be silent, not singing those songs that are sometimes the best way to separate and identify flycatchers.  Here is a link to a document provided by eBird Central America that will give you a summary of the ID challenges and provide you with tips on how to separate: Flycatcher ID challenges in a Central American context.