One of the most common warblers anywhere in North America is the Yellow-rumped Warbler. When we lived down in California the “butter-butt” was one of the species that you expected to see all winter and even, in some pockets, year round.  Here on Vancouver Island it is a summer bird that will show up migrating in the spring and fall and in numbers that make it a common sight, perhaps the most common warbler seen in North America.

Many birders probably will not pay much attention to this common bird.  Look at the rump — if yellow checkmark beside Yellow-rumped.  Want more detail? Look at the throat.  If it’s yellow it’s an Audubon’s with normal western range from the Pacific to the Rockies and north to Haida Gwai.  If the throat is white, it’s a Myrtle with range just about anywhere in North America.  Oh, Audubon’s and Myrtle are sub-species.

First, a side view.  Note the yellow markings on the throat, top of head and shoulder.

Next,  a view more from the front.

The throat marking is yellow for the Audubon’s sub-species seen on the west coast. On the east coast the Myrtle is more common with its white throat patch. 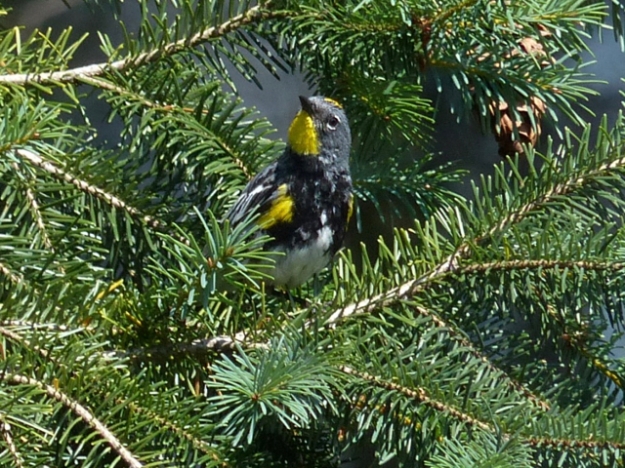 Of course I had to have at least one picture from behind of the yellow butt, er rump.

At this time of year, early summer, the new batch of birds are hatching, fledging and showing up with all the other birds making bird identification trickier.  These new birds would be unrecognizable to anyone who has only ever paid attention to adult birds.  For instance, look at the following picture taken on July 11 2019: 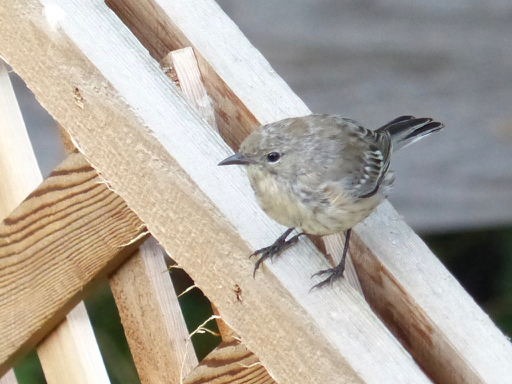 It doesn’t look much like a Yellow-rumped but it turns out that this is in fact a juvenile Yellow-rumped Warbler (thanks to those who helped me with the ID).  There is no evidence of the yellow patches seen in an adult.

Look at the next sequence of 4 images, all of a single juvenile Yellow-rumped, taken over a period of a few seconds on July 14, 2019.  How do I know this is a “butter-butt”? Look at the second picture taken a few seconds after the first.

Nothing? Don’t see it?  Look at the third picture taken a few seconds after the second:

The bird has adjusted its feathers to show the yellow-rump.  Finally, a few seconds later still: 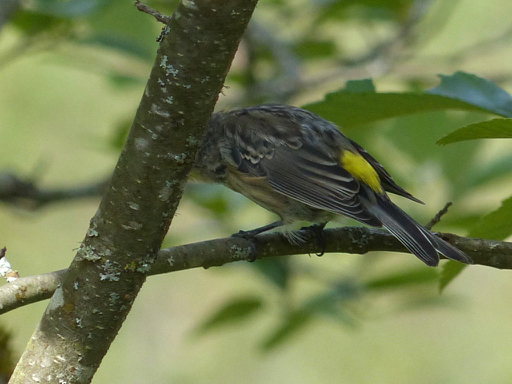 The bird’s identify has been fully exposed despite the lack of any of the other yellow patches.

Nature rarely does anything without a reason which makes me wonder what purpose the yellow-butt and the ability to expose it play in the day-to-day of this warbler.  At least it makes identifying the juvenile birds without any other yellow markings a little easier.

The Audubon’s and Myrtle sub-species were separate species until 1973 when scientists combined them.  Better DNA evidence suggests that perhaps they should be separate species after all.  Check out the following 2016 article by Hugh Powell in All About Birds, an online free resource from the Cornell Lab of Ornithology: Goodbye, Yellow-Rump: Will We See A Return To Myrtle And Audubon’s Warblers?