[Updated December 10 2014 based on feedback.  Additional links on the Palila have been added.]

A recent week-long vacation took us to the Hawaiian Islands (October 26 to November 1). Having previously been to the island of Kauai at the old end of the island chain, we decided to try the island of Hawaii at the other, newer end.  To prevent confusion with the state of Hawaii this is frequently referred to simply as the Big Island.  I had my Panasonic FZ-200 camera along to document the trip.

On the last full day, I signed up for a Rainforest and Dryforest Birding Adventure tour — a day-long outing put on by a tour group called Hawaii Forest and Trail.  They do many other tours too that are not just for birding.  The rest of our group, for instance, went on the Mauna Kea Summit and Stars Adventure trip which takes you up to the volcano’s summit to watch a sunset.

Our trip set out in search of 2 specific target birds.  In the dry forests on the side of Mauna Kea we would be looking for the Palila, a critically endangered species which lives in a single forested area on the volcano’s slopes.  This forested area is the source of the māmane plant which the Palila has adapted to be able to eat and which is toxic to other birds.

In the second part of our excursion, we would travel to some wetter forests where we hoped to find different endemic, the ʻAkiapōlāʻau.

While we were, unfortunately, unable to track down the ʻAkiapōlāʻau, we were extremely successful with the Palila and the rest of this article describes that encounter.

Mauna Kea and the Palila

First, a quick note and the Palila habitat on the slopes of Mauna Kea.

Mauna Kea is still considered to be an active, though dormant, volcano and even though it has not erupted in 4600 years there is still the slim possibility that a lava flow from a future eruption could wipe out this habitat leading to their extinction.  While this might make for a good story in Hollywood, the reality is that there are much more dangerous risks that could well see the Palila gone from these slopes long before they are touched by lava.  Forest fires, for instance could, in the right conditions, very quickly destroy the Palila habitat.  Other threats include introduced species of plants, animals, insects and disease.  The Hawaiian government’s Mauna Kea Forest Restoration Project has lots of good information here.  Finally, according to BirdLife International, the endangered status of the Palila in recent years is also related to rapid population declines as a result of drought that has affected its primary source of food, the māmane plant.

The plan was simple.  We parked in an area accessed by a hunter access road on the lower slopes of Mauna Kea.  The trip organizers allowed for up to 4 hours climbing the slopes to find and view the Palila after which time, win or lose, we would head for the second location.

Here is a picture taken near our parking spot and at the lower edge of the area expected to contain the Palila.  Note the sparse trees on fairly open grassland. 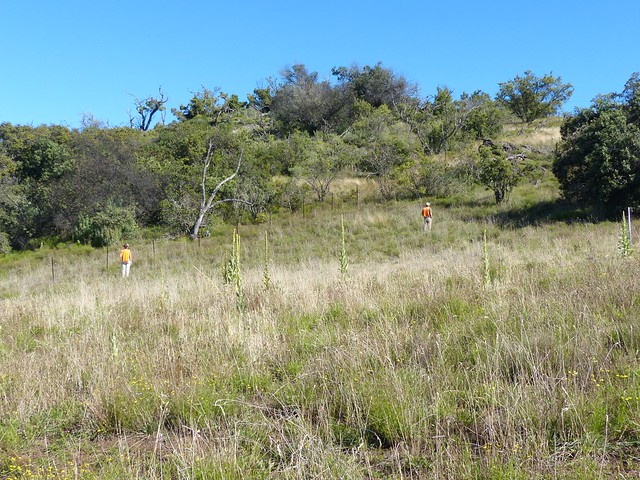 Here is a second shot taken as we climbed a little further up the Mauna Kea slope. 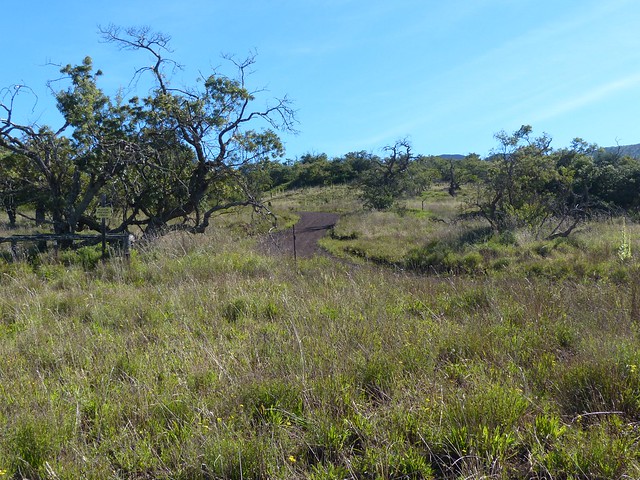 Found:  A Family of Palila

According to the guide, on one recent trip they spent most of the allocated time hunting for the Palila and only found them as they were about to quit and move on.  We got lucky and found one after about 15 minutes with another pair showing up shortly thereafter.  In fact it appears that we had found a family unit with male, female and juvenile foraging together.  The juvenile showed typical begging behaviour with fluttering wings and an adult was doing the foraging and feeding of the juvenile though regurgitation as described, for instance, in a Palila wikipedia article.  This article says that both adults will regurgitate to feed the young in our case the male was feeding while the female stood guard, presumably looking for predators.  If the wikipedia article is correct then perhaps they take turns feeding and guarding or perhaps the guarding behaviour only happens occasionally, for instance when a large number of two-legged, orange-vested homo sapiens are also foraging in the area.

If we only consider predators seen historically before the arrival of man on the islands the most likely candidates would probably have been the Hawaiian Short-eared Owl (Pueo) and the Hawaiian Hawk (ʻIo).  It is not clear what threat we birders posed to the Palila though it was clearly not enough to drive them away.  Whether or not the female would have stood guard where and when she did if we had not be there is unclear.

As mentioned earlier, introduced predators are currently one of the Palila’s biggest threats.  These include feral cats and black rats (see for instance this article on the Palila from BirdLife International (birdlife.org).  Mosquitos transmitting avian malaria have also proved very dangerous to the endemic populations of birds.  They are also threatened by habitat degradation especially if it affects the growth and spreading of their primary food sources, the peas from the seed pods of the māmane plant and certain types of caterpillar.  Introduced mammals such as sheep and pigs are particularly bad for disturbing the forest plants.  Through hunting and fencing the threat of these has been reduced.

Our first sighting of a Palila was that of an adult male who was processing a māmane pod in the middle of a bush that provided the bird with some protection.  The following 7 pictures, shown in the order that they were taken, cover a period of about 9 seconds.  All of these pictures were cropped from the original size of 4000 x 3000 down to about 1200 x 800.  The displayed images below are shown at a resolution of 640 x 400 though the full-sized cropped images can be viewed clicking on the image and following the link back to Flickr. 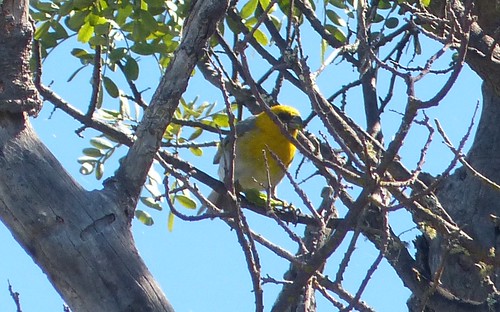 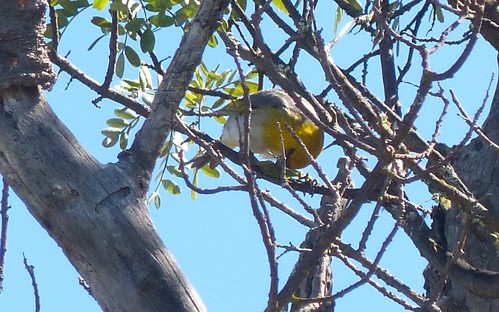 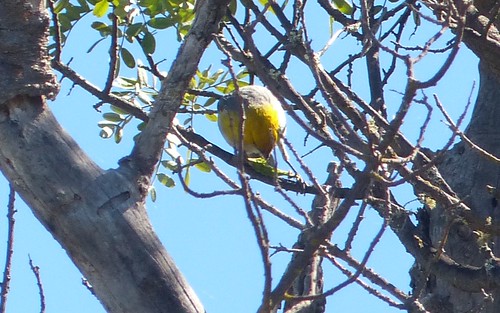 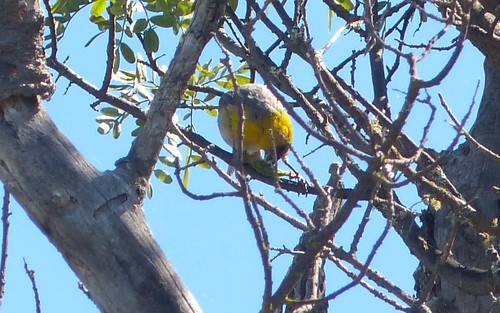 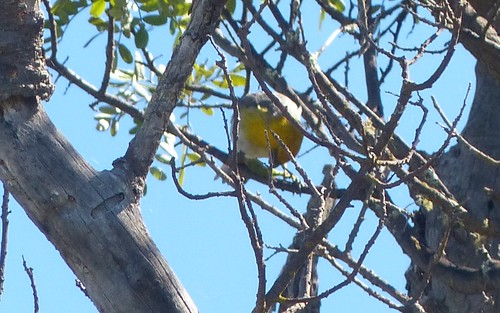 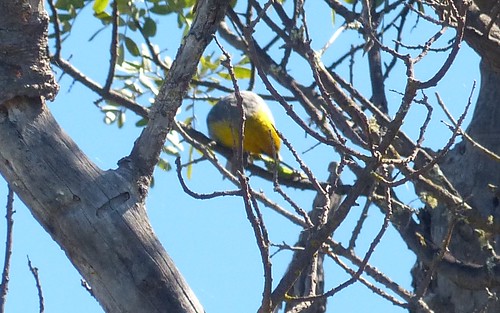 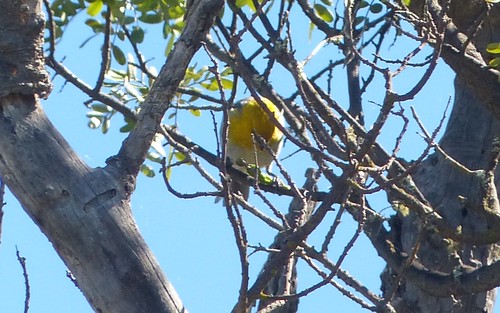 Video of the Male Foraging

The following is a short video that was taken starting 10 seconds after the last picture (above) was taken.  You can hear the group leader describing the bird to some of the birders that were just then discovering it for the first time.  Initially you can see the Palila alternating between working on the māmane pod and raising it’s head up to check its surroundings.

You can also hear the Palila in between the periods where it is working on the māmane pod and also after it appears to be done having released the māmane pod.  Perhaps these calls were communications to the other family members that would be showing up in the seconds that followed the video.  There may even have been a specific message to the juvenile that he (the adult male) was full and that it was time to eat.  This might also explain why he dropped the pod.  It’s not clear why they moved to a different location for the feeding.  Perhaps it was because of our presence or perhaps because it is generally safer to keep moving.

Unfortunately there is a half minute gap between this series of pictures and the next series with adult feeding juvenile.  The only thing that I recall from this period is that the juvenile and adult female arrived to join the adult male and then the female left again.

Second Sighting:  A juvenile begging and being fed by the adult male.

The second set of 7 images were taken over a period of 13 seconds starting 63 seconds after the last picture in the first set or about 38 seconds after the end of the short video.  As mentioned, in these 38 missing seconds the male moved to a different perch and a juvenile and an adult female flew in to join the adult male.  Only the juvenile stayed to be fed by the adult male while the female flew off to, it appears, stand guard (see the third sighting section below).

The sequence between the adult male and the juvenile clearly shows the begging behaviour as well as the regurgitation and transfer of food from adult to juvenile. 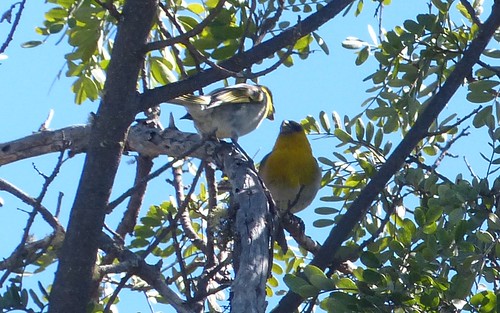 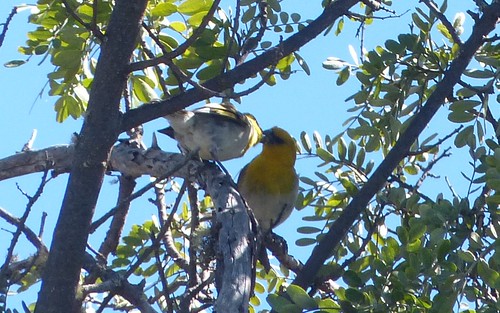 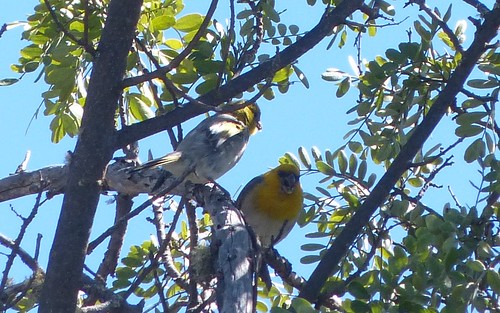 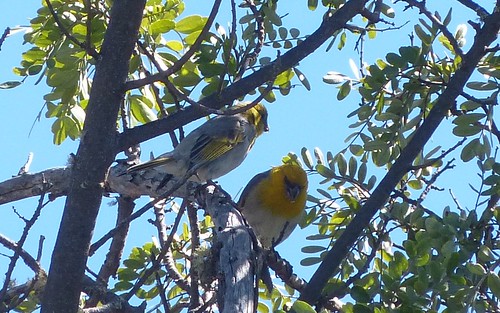 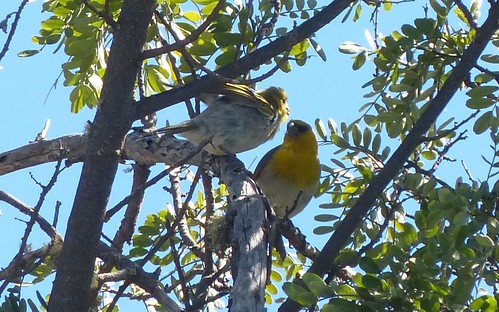 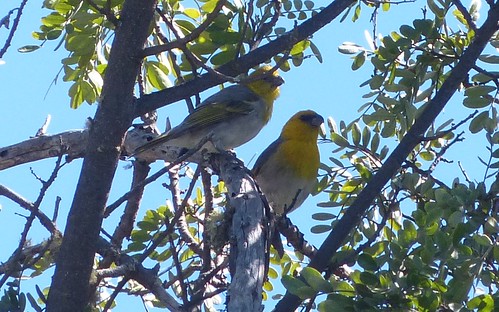 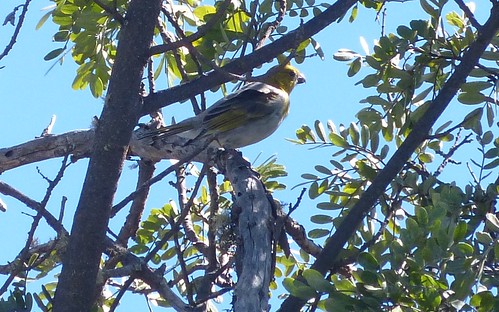 The final image was taken 5 seconds after the previous one and shows the juvenile left alone and somewhat hidden in the foliage while the adult male had moved on, perhaps to start a new cycle of processing māmane pods prior to the next feeding cycle at which point he would call the juvenile to join him there.

The third set of 5 pictures were taken over a period of 24 seconds starting 18 seconds after the last image in the second set.

The adult female Palila, which made a brief appearance off camera took up a position 100 feet or so from where the other two birds were positioned.  Her perch at the top of a bare branch gave her good visibility. She chose a bush that kept all of the birders, which had broken into several groups by this time, on one side of her, perhaps in order to be able to see all of them at once without continually having to look in opposite directions.  As the photos show, she still does look away from time to time, perhaps scanning for other possible threats.  As mentioned previously, the two historic threats where probably the Hawaiian Short-eared Owl (Pueo) and the Hawaiian Hawk (‘Io).  At this point in our trip we had already seen 5 of these owls hunting (one near where we found the Palila) and we had one unconfirmed hawk sighting. 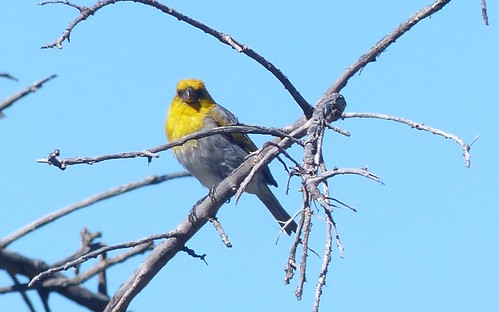 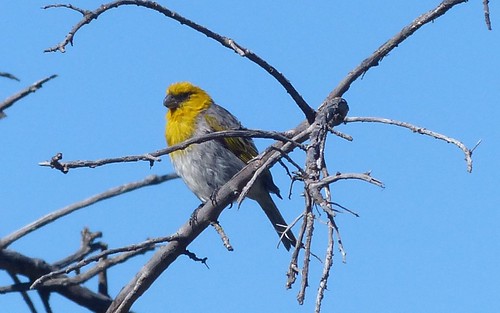 I was impressed by the fact that both adult Palilas were caring for what was clearly a juvenile bird.  The splitting of the task of feeing the young was split into roles of foraging and standing guard.  It would have been nice to know if they switched roles from time to time.  Many species, particularly migratory ones, leave their young to fend for themselves at a much younger age or only one of the adults take responsibility for the young.

I acquired my Panasonic FZ-200 camera to help with bird identification but on several occasions it has proven useful in seeing behaviours that I would never have noticed using just binoculars.  The ability to capture large numbers of pictures and even videos with sound provides the opportunity to analyze different aspects of bird sightings that happen too quickly in the field.

It would seem that my camera is rapidly replacing my binoculars as my primary birding equipment.  Here are some things that I might change in the future that might lead to better results:

It was a fun way to get introduced to a new bird and, while it took a lot of time post-processing, it was definitely more satisfying than a brief sighting and a simple pencil mark on a checklist.

For More on the Palila Check Out the Following Links

The Palila article on Wikipedia.

The Mauna Kea Forest Restoration Project website from the Hawaiian state government has much more detailed and accurate information on current status and threats to the Palila.

The Facebook page for “A Paradise Lost”, an animated movie about the Palila directed by Laurie Sumiye.